Hike to the top of Irelands South East with our spectacular Mountain Explorer Experience, a guided hike of the wonderful Comeragh Mountains including essential skills to prepare you for real trekking situations to start you on your way or refresh your mountain skills for future hikes.

Feast your eyes upon the most amazing scenery of wild and untouched landscapes, breathe in the crystal clear air and listen to that beautiful sound of silence from your vast surroundings at over 2500ft.

Standard hikes of the Comeragh Mountains include linear walks and Failte Ireland National Looped trails. However our hikes veer off the beaten track to allow us to experience off trail navigation and engage in mountain skills such as timing, pacing, feature recognition, compass work, and at The Irish Experience we like to add more to your mountain knowledge so we also include other topic areas such as folklore of the area, environmental awareness issues, flora & fauna, geology and much more.

Moderate or strenuous difficulty levels should be expected for a beginner.

The group size is a maximum of 1 instructor to 6 students (1:6 ratio)

While enjoying a morning coffee/Tea we will go over some elements of what the day will entail and what to expect depending on weather conditions. You will then be lead to the starting location which has a secure off road carpark.

We recommend that you bring the following equipment/gear/provisions:

*If you are not able to acquire some of the above list, please contact us and we will try to facilitate you.

“It is difficult to know how to write of Coumshingaun itself. Whether you speak of it as the geography textbooks do, as a magnificent example of corrie glaciation with the loch held up by a large black moraine or whether you see it as a guidebook says ‘of unknown depth, associated with irresistible currents and evil spirits. In short whether you are practical or romantic, you are certain to be impressed. It is about a mile long, roughly pear shaped, widest at its western, precipitous end and except in winter when small streams flow down the precipices in headlong cascades, not visibly fed from any source . . . The water of the lake is constantly rippled by changing winds, sometimes steely blue in the sun, more often inky black, and always cold, though fish live in it. It is odd to speculate how they came there. I have seen it through a dazzle of sunshine, through swirling clouds of snow, through driving rain hissing off its surface and appearing and disappearing as mists eddied up and down the precipices and I have never failed to find it beautiful. Perhaps it is best to leave it at that’. – Patrick Werner

Behind the lake, the cliffs stretch up to an awe inspiring 365 metres above. The highest point in the Comeraghs at 792 metres is very close to Coumshingaun and we will summit it on the day. It is marked by a cairn with great views over the plateau in every direction.

It offers striking views of steep gullies,lakes formed by glaciers and knife edge ridges that have been carved out and shaped by nature’s delicate hands. A walking paradise to the top of Ireland.

The Comeragh mountain range offers wonderful vistas across the county and down to the sea. Described by some as Ireland’s hidded gem, the Comeraghs offer everything from a dramatic waterfall down a cliff face to the mystery of the ‘magic road’ which runs through the gap of the range. 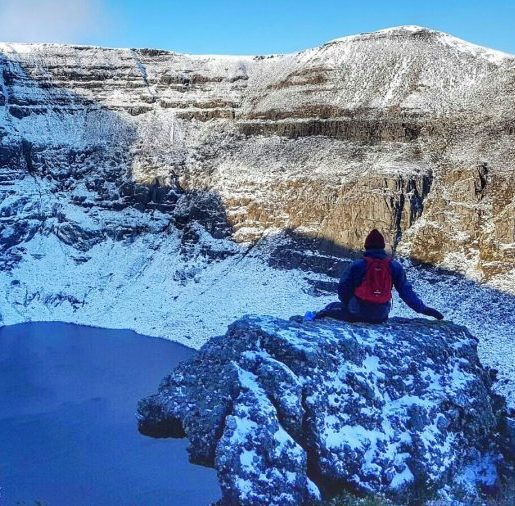 It was my first real hiking experience! We booked last minute as we were staying in the the south east for the weekend and we were looking for something to do a little bit different! I seen the brochure in the Tourist information stand and just wanted to do this! The Irish Experience took us there spur of the moment right from our hotel in Waterford. I enjoyed it tremendously! At times, it was difficult (because I wasn’t used to hiking at all) but as our guide Graham told me, “no pain, no gain” and after overcoming the mild fatigue I could see what the “gain” was! The views were just spectacular!!! We set up camp for a little while to rest and Graham even made us Tea and Hot Chocolate for us with some delicious flapjacks, a lovely touch. I’ve been wanting to do it again ever since! I’ve been bugging boyfriend about it (lol), hopefully we will soon! 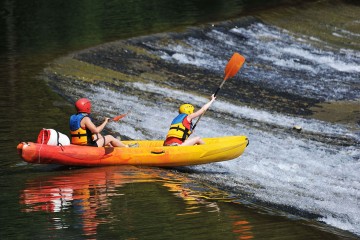 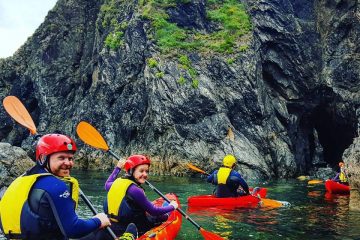 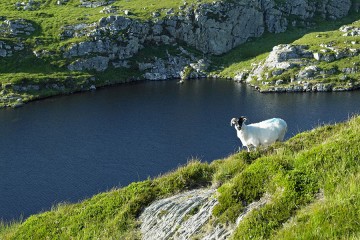